You are here: Home / Slovenia / Love Notes From the Road: Slovenia 2019 Touring Ljubljana and Hiking in Kranjska Gora

We have returned to Slovenia on our maiden voyage with a small group of fun and interesting new friends.

I decided to make Munich my transfer city into Europe to help adjust to the time change and to enjoy the varied experiences offered by the city.  From the historical decadent past of the royals coupled with the trendy shopping and superb old-world restaurants, Munich is a city well worth spending your precious vacation time.

Fully rested and officially acclimated to the European time zone, we take a short one-hour flight to Ljubljana, the capital city of Slovenia.  Slovenia is nestled between Austria and Italy, has always been proud of its unique heritage. Ljubljana is a perfect example of this blend of German, Mediterranean, and Slovenian culture. The old town is a mixture of Baroque, Renaissance, and Art Nouveau buildings watched over by a medieval castle perched high on a hilltop.

Guided Tour of Ljubljana, Sprinkled with Lots of History

We spent two nights in the city center surrounded by old world charm and blended with an energetic atmosphere.  Our guided tour of Ljubljana gave us a glimpse into the trials and tribulations of the past and its steps toward independence and a new and improved future.   For hundreds of years, Slovenia had been a part of other countries: Yugoslavia, with areas also belonging to the Austro-Hungarian Empire, and Italy.  Slovenia gained its independence in 1992 and the people here are very proud to finally have a country of their own.

Our cycling tour began after a transfer to Villach, Austria.  We were blessed with perfect weather for a day of cycling.  The next 35 miles of a paved bike trail reveal pristine green valleys, rivers with beautiful clear water together with the Austrian and Slovenian mountain ranges always in sight.  The well planned and maintained bike trail takes us through Austria, Italy and into Slovenia where we’ll spend the next two nights in the alpine ski village of Kranjska Gora.  There are many “must stop” places along the way for photo ops of waterfalls, the Julian Alps, ancient cathedrals and many other incredible sights.

Our second day in Kranjska Gora was a planned hike, and intermittent rain showers didn’t stop us even though the route was altered from the original plan.  We hiked through forests with tranquil canopy covered trails and a river with clear turquoise colored water always in sight.  In the middle of the forest is a Russian Orthodox Chapel.  It was constructed to honor the deceased Russian prisoners of WWI who built the road over the very steep Vrsic Pass, the highest road in Slovenia with 24 switchbacks.  This road was of great importance during WWI.

It feels great to be back in Slovenia and our guests are enjoying the tour.  It’s so much fun to show people new and amazing places.  Slovenia has so much character, with an abundance of historical sites, and the landscape with so many rivers, lakes and mountain ranges are breathtaking. 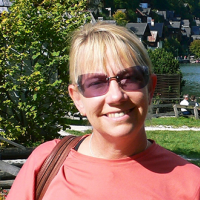 Love Notes From The Road Investigating For Our Slovenia Trip: Last Day Predjama Castle and Postojna Caves
Next Post: Love Notes From the Road: Our Cycling, Hiking, Rafting, and Dining in Slovenia, September 2019